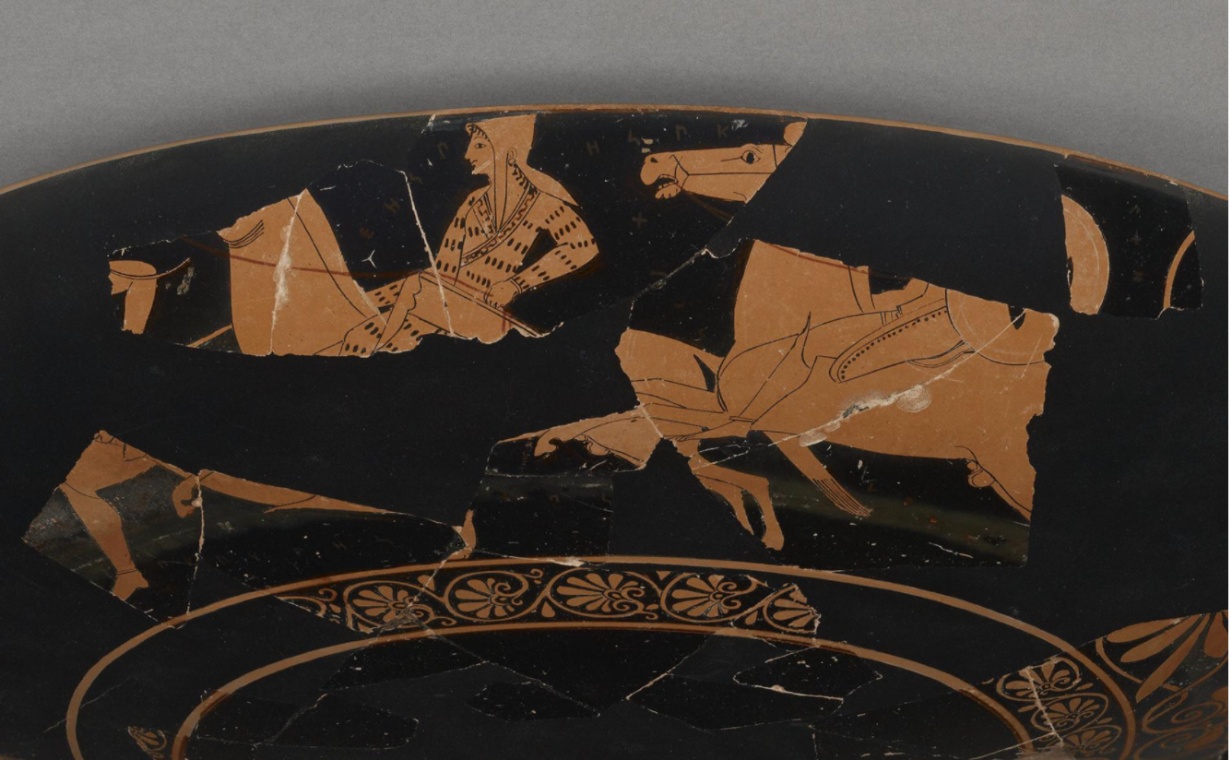 General remark: a decipherment is based on the utility of the language chosen. It is stronger the longer the texts deciphered. In fact the brevity of the Linear A corpus, for example, as opposed to that for Linear B is one reason why Linear A remains largely undeciphered. Our case is based on a limited corpus of short texts. That any sense emerges at all is a sign that we are correct in our identifications.

K’s critique of our methods fails to take note of the fact that the suggested readings have three levels of checking: first by forms that show consistency in representation, second by grammatical consistency, and third by semantic relevance to vase depictions, which crucially was only used after the first two were undertaken and a decipherment posited.

K’s motive for his criticisms is unclear, since he admits at the outset that the NWC languages were ones likely to be in contact with Greek. In effect he admits that the decipherment is inherently plausible.

p. 1, Archaic period – following Mayor’s remark and contrary to K, this suggests a source for vase writing that lies outside Greece and strengthens the case for foreign languages.

pp. 2-4, table is convenient, but more or less pointless

p. 4, “optimistic assessment” is inaccurate. We gave a guarded one, with some confidence in cases 1 – 6, as noted in quote.

K fails to understand the usual antiquity of dialect variations. No “late innovations” were encountered except for the Kabardian one, which he notes. (But see below on this). Historical work in West Caucasian is largely deficient if not simply wrong, while the material in Kartvelian, Iranian, etc., is so short as not to merit mention. Only Indo-Aryan required any comments and these would be generally known to an informed linguistic readership.

p. 5 “I believe… “ is not an argument. Proto-NWC is quite old, if it can be linked to PIE, and at 2.5 kilo-years the forms encountered were in overall form similar to those of the modern languages. A discussion of Proto-NWC would not have been relevant, much less references to Nostratic, presumably much older The dominant historical features that emerged were the retention of certain inflections across the putative languages that are now confined to particular branches or dialects, such as /a-/ for a third person verbal inflection in Circassian now the third neuter in Abkhaz, and a “sporadic” third person in Ubykh.

p. 6, Lexicostatistics arguments are never conclusive because of the radical degree by which languages can diverge in their vocabulary and grammar. No reputable historical linguist relies on this technique. I would put the differentiation of PNWC well before 2,000 BC. The branches have a very low level of shared cognates and retain grammatical similarity only because of prolonged contiguity.

The data itself indicates that we are dealing with a differentiated NWC family. By standard scientific practice fidelity to the data this takes precedence logically and factually over any lexicostatistical “guesses.”

p. 7 f.n. 1 is basically a slander against me. I cite Kuipers, who was not from the Soviet Union, but rather from Holland. The work by Shagirov and Kumakhov on the history does little to advance the history of Circassian beyond Trubetskoy’s and Yakovlev’s efforts. All of these are only at the level of Proto-Circassian. Only Chirikba (K’s 1996b) makes a serious effort to reconstruct PNWC.

I am talking here about early stage of established branches of a family. K’s remarks here are irrelevant.

§ 2.2 K fails to understand Circassian naming, which is tightly controlled semantically, as noted in the paper.

It is unclear what “probabilistically expected” means. The matches are not just to dictionaries, but to vase scenes as well, as already mentioned.

§2.3 and n.2, pp. 7-8. This is an odd remark the point of which is unclear. Yes, it is quite possible that some of the “Classical” Anatolian languages are represented, as well as others languages. In fact Proto-Armenian does occur in onomastics, but not on the vases. It is not clear if K is aware of this fact. There was one case at least of glossolalic-like nonsense and several cases that appeared to be languages that I do not know. I encourage K to spend his efforts looking at some of the very languages that he suggests.

With his alternative proto-form for ‘to steal’, PNWC *GywV, K reveals his doctrinal adherence to Nostratic ideas. If embraced these lead to a proto-language with nearly 200 phonemes, a manifest absurdity. PNWC has converted morphological variation into phonological complexity and variability, as I have shown in my work. He seems unaware of my innovation. So, contrary to K’s characterization of my work on this form I had very clear reasons to “slur over” what is in fact an utterly implausible etymology.

As to the meaning ‘great thief,’ (also ‘shoplifter’ according to my dictionary) this is clearly a description of this appellation for ‘wolf’. Incidentally, in all my work with numerous informants who spoke a wide variety of dialects I never once heard the suffix /-z!e/ glossed as ‘great’.

n. 5. I fail to see the significance of the Ubykh form, but this occasions a general remark of mine on NWC and Nostratic. This school of historical work rests heavily upon resemblance with a minimal amount of sound correspondences or laws that establish regularities among forms that are divergent. While NEC is treated fairly extensively in the work that I have seen, NWC is not, and the NWC forms that do appear may well be loans into or from NEC.

K seems unhappy when I use relatively modern forms or when I resort to the reconstruction of older ones.

Well, noraretteblo does occur on the Goose Vase! So, it should make sense there. Mayor questioned me about my analysis three times quite extensively before she revealed to me the nature of the vase on which the form occurred.

If K thinks the semantics of the form is odd, then he should acquaint himself with such current forms as */bLe-pRe-c@&J-e/ ‘past-look-exit, emerge-at ‘to peer at something out from behind something’.

p. 12, §3, K ignores the Circassian form (Kuipers 1975, p. 19), Temirgoy */ceXa/, Kabardian */ZeXa/ ‘hot tempered’, where the affricate has been retained. My guess is that the Abkhaz /-c/ suffixes go back to a sense of fervor or some enhancement of the root, and that this has been lost in modern Abkhaz. Again, we are looking at very old material.

p. 13, n. 10. The details here are correct for the current dialects of Abkhaz – Abaza, but K (nor Starostin nor Nikolaev) is not aware of a sound shift in Abkhaz-Abaza. ‘To say’ comes from a uvular stop, preserved in Ubylh /-q&a-/, in Hakuchi West Circassian /-q&Wa-/, elsewhere in Circssian shifted to /-OWa-/, /-Oa-/, but shifted to a pharyngeal in Abkhaz-Abaza, along with all other uvulars. Earlier pharyngeals have given pharyngealized uvulars (preserved in Bzyb, Ashkharwa, and Tapanta), while an original */-O-/ has yielded /q&, q&W, q&J/ in combination with */y, w/, Abkhaz /-q&a-c&-/ ‘hand-set, to do’, Circassian /O / ‘hand’. So, it is quite possible that at this early date these shifts had not yet swept through Abkhaz and the Greeks used < Κ > for ‘to shout’.

p. 14. Forms of ‘to cover’ retain the uvular stop only in Hakuchi, which one might consider a sub-dialect of Shapsugh, since this dialect lacks glottal stops. The form with a velar, cited by Smeets, is undoubtedly a late distortion and hardly is to be included in an etymology. For PC the only legitimate reconstruction is */p&OWe/, which can also be found with Bzhedukh speakers. Clearly this originates from */p&q&We/. One may compare Circassian /t&OWe/ ‘two’, Ubykh /t&q&Wa/ ‘two’, where Ubykh and Hakuchi share a retention, but the rest of Circasian has the glottal stop. Here at least I agree with Starostin and Nikolaev (n. 12).

p. 15, I restrict myself to one comment on the ‘Conclusions.’ If I in fact have found some patterns suggestive of NWC “lects,” then given the limited amount of material and the task set to me by Adrienne Mayor, I find it odd that K says “these features are not sufficient to attribute the words … to ancient West Circassian lects.” This is odd because how else is one to make a decipherment when one finds patterns congruent (to some extent) with those of an existing language. (Decipherments of extinct language isolates, such as Sumerian, are much harder and generally rely upon multi-lingual remains.) Are these parallels to be ignored? Further there was evidence for Georgian, Ossetian, and perhaps Sindian if this last was a relic Indo-Aryan language, which is entirely possible given the refugium character of the Caucasus. K has not addressed these instances.

Finally, let me make a comment on changes, both new and possibly old. Take Kabardian [-a–-] ‘past tense’, where the uvular emerges in the remote past [-a–Ga–-]. The first is from a sonorized surface form of underlying /-Ge-/, the second from /-Ge-Ge-/ , which is why the uvular is retained in the pronunciation. Ubykh /-q&a-/ suggests that the course of history for this suffix has been : /-q’a-/ ≥ */Ga/ ≥ */-Ga-/. What is important here is to realize that ejectives can voice, whence */G/, and that a voiced uvular stop has a strong tendency to spirantize because of the small pharyngeal volume available for airflow over the glottis. Hence a shift to /G/ ≥ /G/ is likely. Since the realization of /G/ in Circasian and Ubykh is sonorant, it is a simple shift for Kabardian to render it as [-a–-]. Note that PNWC * /q&/ yields Abkhaz /\/ , as with */-qa-/ ≥ /-q&a-/ (“preverb glottalization”) ≥/-Ga-/ ≥ /-\a-/ ‘a quick inception of action’ in Abkhaz, ‘hither’ in Tapanta, /-q(a)-/ ‘hither’ (“in hand verb”) in (W) Circassian. In short this change is phonetically likely, and so should be no great concern if it is attested at various stages in the history of a language family.

The full text in PDF can be downloaded by clicking here