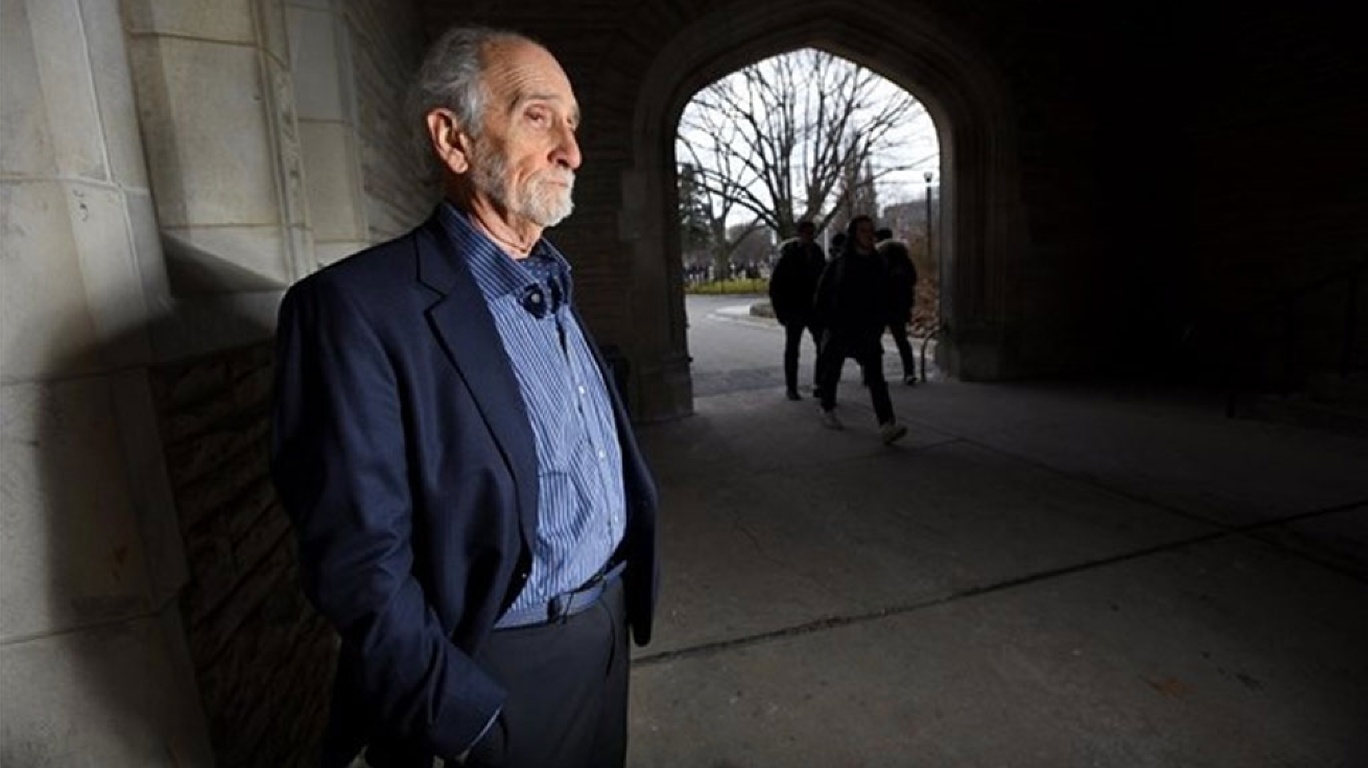 The professor lingers near one of McMaster's stone archways; mythic symbols, he says, of entering or returning to a realm.

Students pass the bearded man who sports a blue and white polka-dot cravat and who could greet them in 18 languages. (Maybe 17, his Maori is rusty.)

This is classic Colarusso: you talk neckwear and soon his mellow voice has you floating 200 years through the mists of time and hearing exotic tongues.

His realm is in one sense the university where he has taught for decades. It has also been corridors of intrigue in Washington D.C., and rugged bloodstained lands southwest of Russia, the Caucasus, steeped in ancient languages and legends.

That makes him a unique figure in Hamilton, if one relatively few have heard about.

A linguist and mythologist, he seems from another era, a renaissance man out of place, if not yet out of time. But time has given him pause lately, too.

There is much to do, teach, write. A prospective graduate student phones from Israel looking for advice. And he has major surgery coming up.

A radiator rattles in his tiny office where he is surrounded by stacks of books and papers and journals that nearly swallow him up.

He has a pensive look, and a world weariness that says: how did I get here?

"Most of us live our lives in the obscuring murk of anonymity," he wrote in a recent article, "with its impending oblivion, buried in a fog of information."

He moved to Hamilton in 1976 because his American spouse was offered a job at McMaster.

They were an intellectual power couple and so his unlikely destination perhaps fit a paradigm of what he imagined his life should be.

But one day she told him she used to believe she was smart, until she married him.

"I realized the marriage was over," he says.

He was born in San Diego in 1945. His parents met in Mississippi, where his father, in the military, was stationed at an air base.

"He first saw her from the back, she had chestnut dark hair," says Colarusso. "He said to his buddy: 'You see that girl with the hair? I'm going to marry that girl.'"

He learned the story by overhearing it, not directly from his father, who was an aloof, cold, angry man.

"He had his passions but he never showed them. In that regard he was kind of a European peasant. I met those kind of people again in the Caucasus."

Colarusso was raised in a tenement in Newark, N.J. His grandmother was Italian, and he discovered he had a knack for translating for his mother.

He says there is evidence that if you grow up in a multilingual environment the brain has a mechanism for picking up extra languages.

Colarusso often begins stories with riddles and then colours in the details: The breakthrough launch of the Sputnik satellite by the Soviet Union led to standardized testing of students in the U.S., when leaders worried they were falling behind the Russians.

He learned that his IQ was in the one-millionth percentile. Most of his friends ended up in blue collar jobs but he won a scholarship to Cornell in the Ivy League, where he studied physics and philosophy.

More critically, he was required to take a course in Ancient Greek. A professor slid a Greek passage in front of him. "He said, 'you understand that?' And I said yeah, but there are a few words I don't know. He says, 'I could tell from your intonation you understood it. You are a polyglot.'"

While taking his Masters in philosophy at Northwestern University, Colarusso would pass an Armenian church on the way to campus. He was intrigued by their "weird alphabet."

Armenia is part of the Caucasus, a mountainous region squeezed between the Black Sea and Caspian Sea, part of Eastern Europe and Western Asia. The area is known for diverse cultures, languages, and conflict.

"I have sort of been embedded in that world ever since. There's a Russian phrase, kavkazskiy plenmik. It means 'prisoner of the Caucasus' — once you get involved you never get out."

In 1968 he was accepted at Harvard to do a PhD in linguistics. He continued studying languages of the Caucasus, such as Circassian, indigenous to people from the area near Sochi, site of the 2014 Winter Olympics. The Circassian people were victims of Russian genocide in the mid-19th century.

In 1971 he applied to work for the CIA. On his test he offered an unsolicited opinion: the U.S. will lose Iran — the Shah of Iran, an ally, will fall and the new regime turn radically against the U.S.

He received a letter from a CIA recruiter: "Apply again when you know something."

(In 1979 the Shah fell, an Islamic Republic was declared and 52 Americans held hostage in Tehran for 444 days. Years later, he says that same CIA official offered an apology to him. "And I replied, thank you, and I'm sorry I was right.")

At McMaster, he built a career teaching linguistics and mythology. In 1991 his knowledge of the Caucasus — and knack for predicting events, aided by contacts in the region — spiked in value when the Soviet Union disintegrated and the U.S. established relations with newly independent republics.

At one point, Colarusso, who befriended the leader of a territory called Abkhazia, placed a phone call to the U.S. State Department and left a long message, predicting that war would rage between Georgia and Abkhazia.

He received no response. And then war broke out. The following year, Colarusso was invited by American officials to escort an Abkhazian delegation through the U.S. Congress.

During Bill Clinton's presidency Colarusso became a go-to analyst for the Caucasus, consulting the National Intelligence Council, the civilian oversight body for the CIA, and advising and serving as a diplomatic back channel.

He would be in his office at McMaster, receive a phone call, and that night be on a plane to Washington.

He advised officials from all sides during the war in Chechnya including Russian President Boris Yeltsin.

There were nocturnal meetings under bridges, secret envelopes passed. He was told to check his home for listening bugs. It was an exciting but potentially deadly position, says a Canadian official who works in military intelligence in Ottawa, and is a close friend of Colarusso's.

"If the Russians had felt John was a double agent he would not have come back from one of his trips."

One night, Colarusso met a Russian diplomat named Oleg Serov at a Georgetown restaurant for the first time.

Serov stared into the lean tanned face of the Canadian academic, and to him he looked like a native of the Caucasus — more to the point, he looked Circassian, a descendant of the genocide.

Serov wondered if the man named Colarusso would, at an opportune time, plunge a dagger into his neck.

After eating, and drinking vodka, Serov summed up Russia's view of relations with the West.

"No, I'm talking about the Mongols."

"Oleg was going back 800 years," he says. "I just said, 'Well we didn't know you existed. But you survived, you prevailed.' And Oleg said: 'Da. We prevailed.' Which I thought was marvellous."